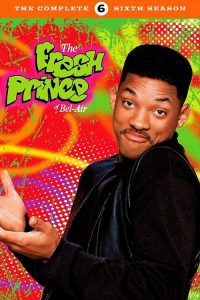 The Fresh Prince of Bel-Air: Season 6

The sixth and final season of The Fresh Prince of Bel-Air premiered on September 18, 1995 and aired its final episodes on May 20, 1996. In the series finale, the main characters all move out of the Banks Mansion to move on with their lives. Hilary’s talk show moves to New York City; Ashley moves to New York with Hilary; Carlton transfers to Princeton University; Geoffrey moves back to England to be with his son; Philip, Vivian and Nicky move to New York to be closer to the rest of the family; and Will remains in California to finish his college studies. Will Smith, James Avery, Alfonso Ribeiro, Tatyana Ali, and Joseph Marcell appear in all episodes. Daphne Maxwell Reid was absent for five episodes and Ross Bagley was absent for eight episodes. DJ Jazzy Jeff appears in two episodes this season.