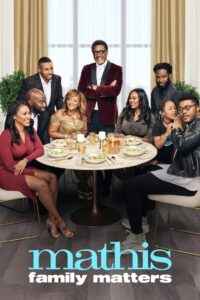 Known for his court show, “Judge Mathis,” Greg Mathis Sr. holds the record for the longest-running daytime show hosted by an African American male. While he’s a boss in the courtroom, he’s often overruled at home by his wife and kids. This docu-series presents Greg and Linda Mathis being parents to their four adult children and multiple grandchildren. With two kids who live two blocks away and two more who live across the country, they always find a way to be together and end up on their favorite judge’s doorstep.